Who likes a good pizza party?! 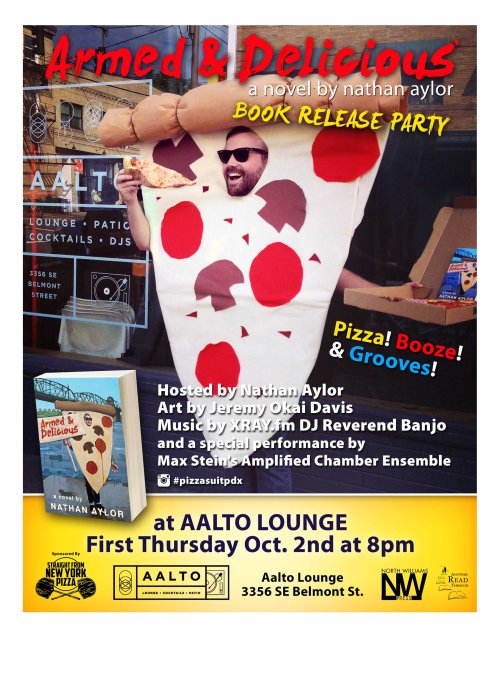 I’ll be on 94.7 fm, Alternative Portland, talking with Gustav about Armed & Delicious as well as playing some of the musical tracks I was listening to whilst writing…

If you don’t live in Portland you can listen tonight at 947.fm at 6pm. You can also download the 94.7 app on your smartphone! 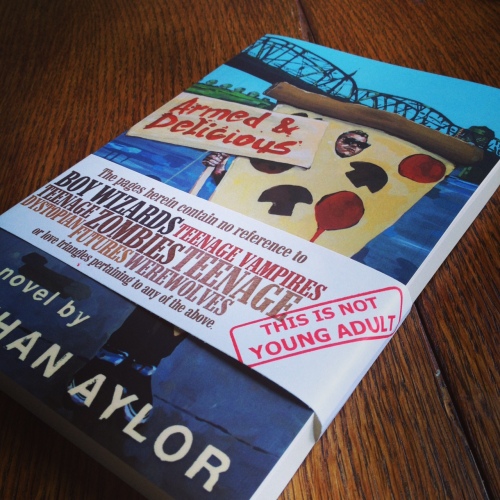 Unless one subsists on a diet of tree pulp and non-toxic black ink, then my DEBUT novel “ARMED & DELICIOUS” might not make the ideal midnight snack… so, I’m not sure why I titled my post thusly.

I suppose the gist of what I’m trying to get at, on this lovely summer eve, is that my novel, ARMED & DELICIOUS is now available in paperback form! Where? Well at Powell’s City of Books, of course! You can find it in store or order directly!

Powell’s, for those who haven’t had the pleasure of browsing through an  actual CITY BLOCK worth of books, is a literary treasure, located in my current city of Portland, Oregon.  It’s a damn near labyrinth of words and volumes and to have my novel receive its own bit of real estate amongst so many great titles is an honor.

Did I mention that Powell’s is independent through and through? Oh yeah. Punk Rock to the core, my friends, which suits me just fine.

While most authors would want to have their paperbacks on “The Website That Shall Not Be Named”, I believe that the independent spirit of “Armed & Delicious” goes further than just bucking the trends of what’s “hot” or “popular” in fiction and to put it simply: I love bookstores. I also love discovering new books in said bookstores and if that bookstore happens to be owned and operated by actual people, then all the better.

Granted, Armed & Delicious is also available in e-book form HERE , HERE and the Apple iBookstore, but in this day and age I guess that’s just par for the course.

In closing, I encourage you to support independence in all its forms and to at all costs, stay sexy.

KICKSTARTER PHASE III COMPLETE (GET IT!)

“Wait, what?!  PHASE THREE? What ever happened to PHASES ONE and TWO?” You just said, I’m sure.

They both happened, my friend. I just didn’t post much about them. But I’ll catch you up, real quick.

PHASE ONE of the KICKSTARTER THREE-PHASE-SERIES for “Armed & Delicious” was to raise first the funds, which was completed thanks to a handful of wonderful folks like you. 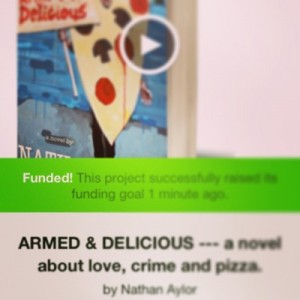 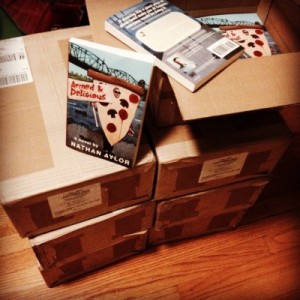 Done! Just look at them in all their paperly glory.

So, what is PHASE THREE?

Why, it’s the most important Phase in any Kickstarter Campaign (of course), and that is to deliver the “goods” to my Kickstarter Backers. In this case the “goods” being of the literary variety.

Granted, there were some hiccups, delays and and all around sadly vague excuses for why Armed & Delicious was taking so damned long to publish, but as they say, better late then never! (yikes)

Below is an image of me pondering wistfully the smile of joy and satisfaction crossing your face at the very moment that you’ve realized your hard earned “goods” have just arrived. 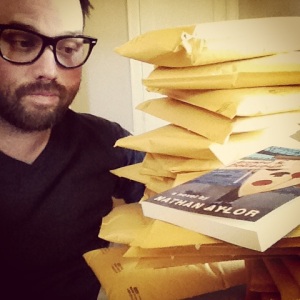 There you have it folks. PHASE THREE COMPLETE. Now, by the time most of my Kickstarter Backers have read this, they’ll already be nose deep in the book they helped to create. But, if you’re reading this and you’ve yet to receive your Kickstarter rewards in the mail, give your ol’ pal Nate a shout at pizza.suits@gmail.com

We’ll sort you out.

… and with the Kickstarter Chapter complete (to a greater or lesser extant) we now find ourselves at the threshold of a new chapter titled, “WHAT THE HELL TO DO WITH AN INDEPENDENTLY PUBLISHED NOVEL?”

It’s a book! It’s a plane! No, it’s definitely a book. But it’s my book, so that’s pretty neat

Yes my friends, the trade paperbacks of my novel “Armed & Delicious” have arrived!

Now I will be focusing on getting Armed & Delicious into independent bookstores across America.

Would you like to see it in your local bookstore?

Holler at your pal and with a shop that you love and I will begin the courting process immediately, because getting to know a bookshop is kind of like a first date. As long as you keep your breath fresh and don’t get sloppy-wasted, you’ll do just fine. 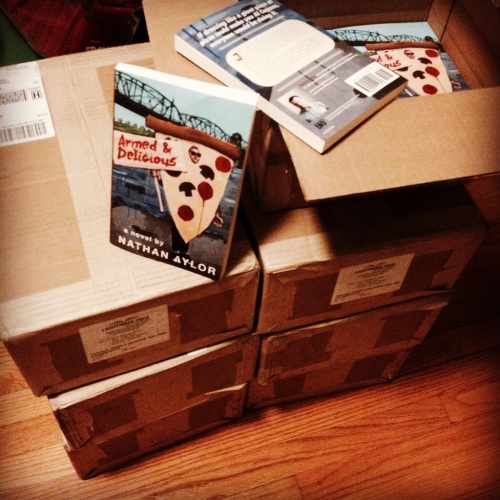 You’ve been waiting… and I love you for it.

As you may have noticed, my most recent “shipping date” came and went like a ship in the night and with nary a whisper of publication (Sorry!). But today, my friends, I am writing you to say that Armed & Delicious, the book which you have supported, is in print-production as we speak!

The e-book version is also in the publication phase and will soon be available on Amazon, Barnes and Noble online and the Apple Ibook store.

This means that within the next 7-10 business days I should be receiving your books in the mail and shipping them directly! The additional reward goodies have already been coming in and I couldn’t be more pleased with how they’ve turned out.

As always, feel free to contact me at armedanddelicious@gmail.com with questions, concerns and sonnets.

Funzo Dunzo! We did it! 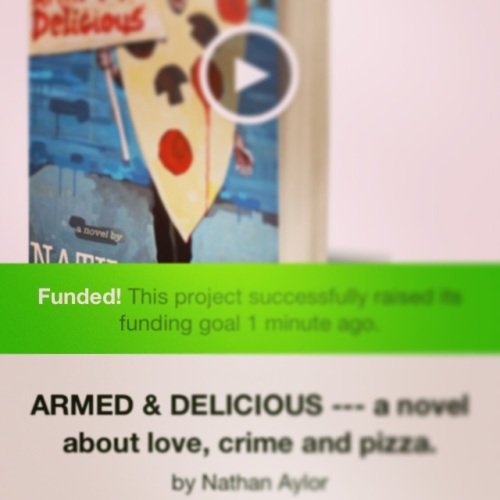 For those who have been following my Kickstarter.com campaign, you may have heard that Armed & Delicious has surpassed it’s funding goal.

Well, it’s true! Armed & Delicious will soon become a physical book, available in Independent Bookstores as well as Online (in e-book format) and it’s all because of you.

The campaign has been a very unique experience. I’ve laughed, I’ve cried, I’ve laugh-cried-laughed. But one thing I’ll certainly take away from this is that the generous and sincere nature of one’s friends, family and even perfect strangers can be absolutely staggering.

I will be posting updates to keep you apprised as to the status of Armed & Delicious.

In the meantime, I THANK YOU and can’t wait for you to read my little book.

Heard about the Kickstarter video? Peep it here!